Students have access to our industry-standard, purpose-built facilities. These include:

The Lincoln Sound Theatre is a Pro Tools 5.1 dubbing theatre for mixing sound to picture. It features a large-screen projector, a full Foley sound effects area and a commentary booth for voice-over and ADR.

The Sound Theatre is also available for outside hire and several award-winning films have been mixed here.

The smaller Sound Theatre B is a smaller facility for stereo audio post-production work. 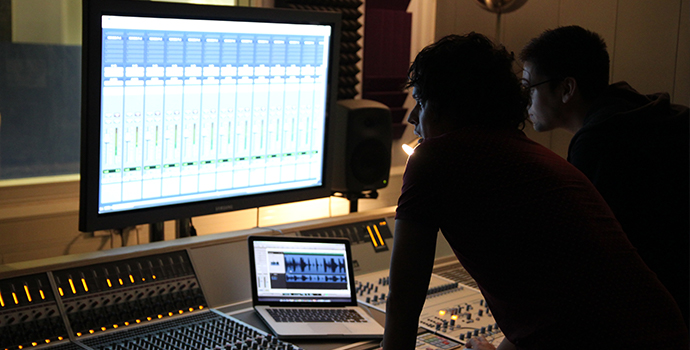 We also have a wide selection of microphones including AKG, Sure, SE Electronics, Rode, Neumann and Electrovoice, and outboard equipment including Sony, Chameleon Labs, Drawmer, TC Electronics, Akai and Lexicon.

Our photography studios are designed to fulfil any photographer’s requirements. The studios are fully-fitted with electronic flash lighting, backdrops, with access to a range of stills cameras of varying formats. We have film processing facilities, darkrooms, as well as digital image editing software. The studios are utilised for a wide range of projects from individual and group portraiture, to module shoots and occasionally live action/slow motion capture.

The Drama Studio is based around the industry specification 12 channel Audient ASP8024 mixing desk and Apollo 16 audio interface. Students are able to choose between using professional standard Pro-Tools or Adobe Audition software to produce audio for broadcast. Attached to the drama studio are two acoustically treated spaces; the live room and a dead room, giving optimal flexibility in content production.

With access to an array of professional quality microphones and expert support available through the University of Lincoln’s Media Loans and learning advisors, there is a wealth of industry experience which can help students to develop a solid foundation on which to grow and develop their skills.

The two main studios for live radio production are equipped with Sonifex desks and fitted with the industry standard Myriad playout system. As well as operating as stand-alone spaces, the option exists to re-route output from these studios directly to the university student radio station, Brayford Radio, for live playout where student produced content can be heard globally.

Brayford Radio, which has its own bespoke radio studio with an Alice Air 2000 desk and Myriad playout system, is situated close to the main Radio Studios and is managed, operated and staffed by students with technical and editorial support from tutors.

The University is home to 2 Radio Stations; the student operated Brayford Radio, and Siren FM, a community radio station set up by university staff in 2007. It attracts volunteers from both the local and academic communities of Lincoln, and offers a range of multi-award winning opportunities. Radio students play a key role in the programming on Siren, and operate the Alice Air 2000 desks with Myriad playout system as they plan and present their own live shows, as well as outside broadcast using i-Rig Pre and Glensound OB equipment.

This studio is permanently equipped with:

This studio is equipped with: 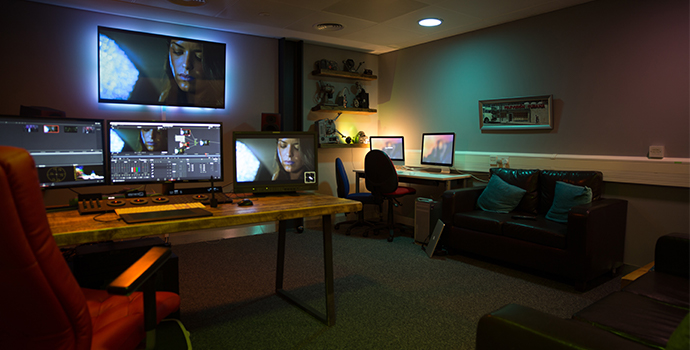 The Parlour is our latest facility which provides colour correction, creative compositing and image repair in an inviting and creative space. It is equipped with high-spec Mac Pros, high-grade monitors and tangent panel control surfaces. Software includes Autodesk FLAME and DaVinci Resolve.

Post Production Finishing is an all-encompassing term which covers a large range of picture based operations, many are creative, some are highly technical, but all are now very much in use within the film and television sectors. It is what makes the difference between incomplete, inferior visual productions and professionally acceptable work. Creativity and innovation starts and ends inside such a room, with many picture based projects requiring more complex editing, compositing and manipulation than a standard editing suite can provide.

The Parlour gives those students who are looking towards this area the opportunity to learn the software and become fully adept during their studies (at both undergraduate and postgraduate levels). The Parlour has opened up new possibilities for research based projects, particularly at MA level. The School also has links with industry figures and companies like Autodesk and Blackmagic.

The room is dedicated to a former student and has been named the Keilan Braithwaite Suite. The Parlour is also available for outside hire and has already been used for several independent film productions.

The University has 2 radio stations which offer opportunities for our students. Siren Radio is our community station, which is licensed by OFCOM and it broadcasts all year around. Brayford Radio is our online radio station, run by students during term-time.